REDBLACKS in tough against Argos

REDBLACKS in tough against Argos

Jonathon Jennings passed for 327 yards and a touchdown, completing just shy of 80 percent of his attempts. Dominique Rhymes led the receiving core with 98 yards on eight receptions.

George Uko turned in an outstanding defensive performance, earning an interception and recovering a fumble. Justin Howell and DeAndre Farris paced the defence with five tackles each.

An unlikely suspect got the REDBLACKS going. Defensive tackle George Uko picked off McLeod Bethel-Thompson’s second pass attempt of the game and chugged into Argos territory.

After the teams traded field goals, Toronto tied the game with Derel Walker strolling into the end zone on an end-around. It was the Argos first rushing touchdown of the season, tying the score at ten.

Toronto looked to be gaining momentum in the first half, but Gump Hayes picked off a deflected pass and returned it into Argonaut territory. Jennings drove the offence into the red zone, only to throw an interception in the endzone.

The visitors took the lead midway through the second quarter, with Bethel-Thompson and Rodney Smith connecting for a 24-yard catch-and-run. Coupled with a Crapigna single from earlier in the quarter, the Argos took an eight-point lead.

Lewis Ward notched a field goal before half, making the score 18-13 at recess.

Toronto extended their lead after the break. Robert Woodson forced a fumble after Jennings completed a pass to Sinopoli and Qudarius Ford returned it to the house.

Although the REDBLACKS kicked another field goal, the Argos put the game to bed in the fourth quarter. Running back James Wilder Jr. found pay dirt three times, making for a lopsided final score.

The REDBLACKS (3-8) are now losers of four straight and open a home-and-home with the BC Lions next week. Ottawa travel to BC Place on Friday, September 13 (kickoff 10:00 p.m. ET) and the teams head to TD Place on Saturday, September 21 (kickoff 7:00 p.m. ET). Toronto (2-9) have a bye week and are back in action on September 20 against the Calgary Stampeders. 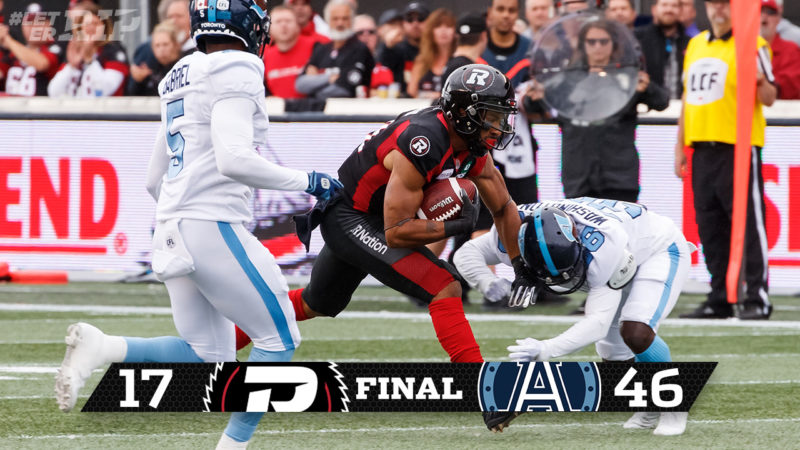 “It was disappointing. Such a good game coming out of the half. It was actually kind of an entertaining game; both teams were able to move the ball and it was going back-and-forth. We were excited coming out of the half – one score game. We were talking about it’s going to come down to who makes more plays in the second half. Then the whole thing went sideways.” – HC Rick Campbell

“Too many inopportune mistakes – costly and timely. They got some points off a lot of our mistakes. It was a close game. We were down five points at halftime and some of the turnovers and mistakes in our negative territory cost us a lot.” – QB Jonathon Jennings

Lewis Ward was honoured at the end of the first quarter for his professional football record of 69 consecutive field goals… Receiver Jerminic Smith made his REDBLACKS debut on Saturday. He caught all four passes thrown his way, accumulating 49 all-purpose yards… George Uko’s first quarter interception was the first of his CFL career… Jonathon Jennings surpassed 13,000 career passing yards during the game… Brad Sinopoli’s opening-drive touchdown was his first major since Week 8. 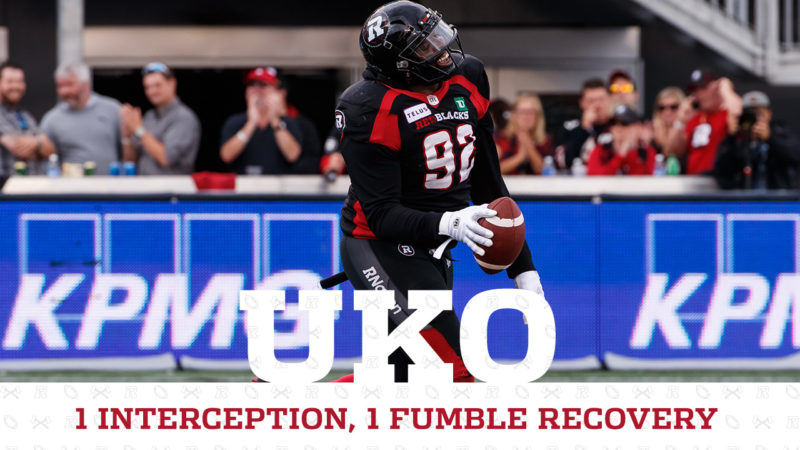