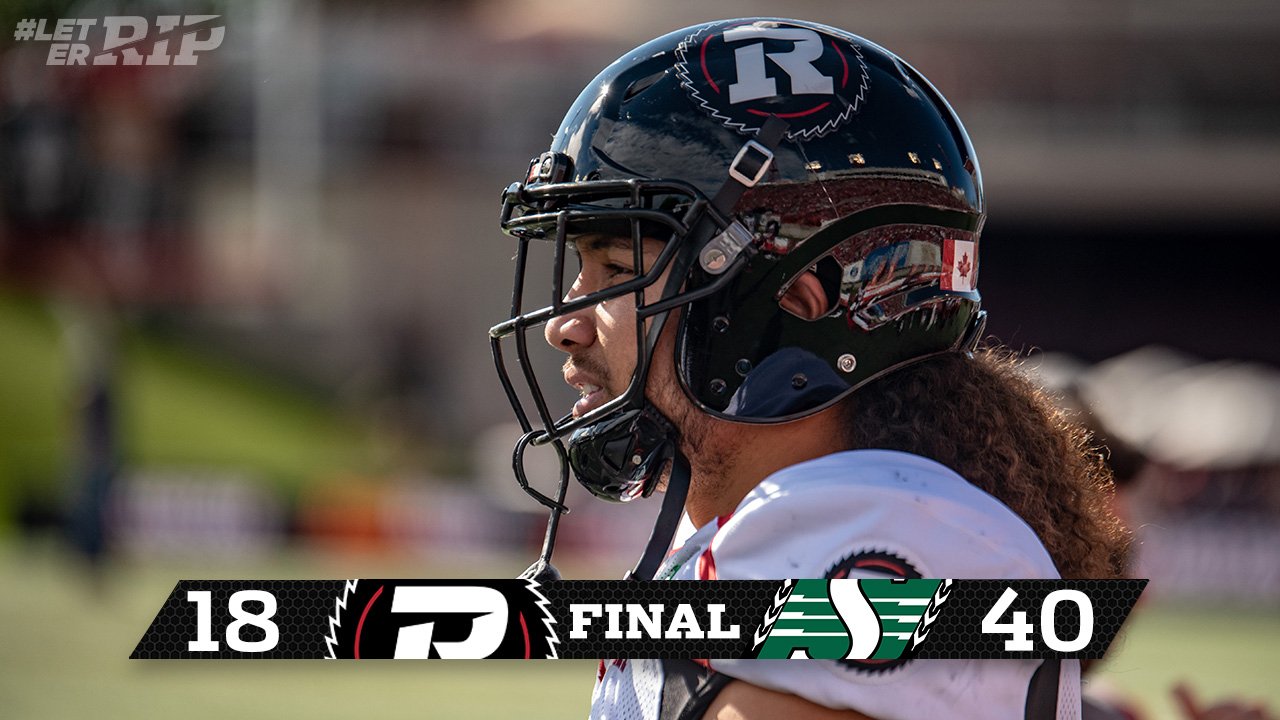 The Ottawa REDBLACKS dropped their third straight game Saturday night, falling to the Saskatchewan Roughriders 40-18 in Regina. The Riders scored 25 points off turnovers after the REDBLACKS turned the ball over five times.

Dominique Davis got the start at quarterback, with Jonathon Jennings taking over before the end of the first quarter. Jennings threw for 208 yards with a touchdown pass, while completing 61 percent of his throws.

The REDBLACKS gave up 40 or more points for only the second time this season. Linebacker Jerod Fernandez led the defence with seven tackles.

Saskatchewan opened up a 17-point lead in the first quarter after benefitting from good field position after three interceptions. William Powell and Cody Fajardo both rumbled across the goal line, while Brett Lauther converted a field goal.

The teams traded field goals to start the second quarter, then the REDBLACKS got a spark. Jonathon Jennings aired it out to Dominique Rhymes, who caught the deep bomb in stride for a 75-yard catch-and-run score.

The Riders tacked on another field goal in the dying moments, making it a 24-12 ballgame at the half.

Lewis Ward’s third field goal of the game chopped the Saskatchewan lead down to ten points midway through the third quarter, but the Riders kept the offensive onslaught going. Fajardo spun away from the pass rush and found Naaman Roosevelt for the touchdown.

Ward converted his fourth field goal of the game on the very first play of the fourth quarter. It’s the second-most field goals he has kicked in a single game this season and the most since he drilled six against Saskatchewan in Week 2.

The Roughriders would add another touchdown after the three-minute warning, securing themselves their fifth straight victory.

The REDBLACKS (now 3-7) are on a bye next week, before returning to TD Place for a matchup with the Toronto Argonauts (1-7). Kickoff is scheduled for 1:00 p.m. on Saturday, September 7. The Roughriders (now 6-3) welcome the Winnipeg Blue Bombers to Mosaic Stadium on Sunday, September 1.

“When we started taking care of the football, we were going toe-to-toe with them. We were fighting our way back into the game, but we couldn’t fight all the way back. I give Saskatchewan credit for doing what they need to do. I saw some stuff on offence that I hadn’t seen in a while, where we were able to establish some type of momentum and some type of flow. It isn’t where we need to be, but I thought there were signs of progress.” – HC Rick Campbell

“I felt like we were in good spirits. I felt like a lot of guys were taking it one play at a time. There were a couple of plays here and there that kind of swung momentum and they scored at the right time. We’ve been saying it each week – you look at our execution and it just hasn’t been very good. This bye week is coming at a good time. We can step back and see things in a new light.” – REC Brad Sinopoli

Saturday was Rick Campbell’s 100th game as Ottawa REDBLACKS head coach… Saskatchewan scored 25 points off of turnovers… Running back John Crockett started for Ottawa after missing their Week 10 contest, but left the game with an apparent injury early in the second quarter. He did not return… Despite trailing by 12 points, the REDBLACKS outgained the Roughriders in the first half… Stefan Logan notched 100 kick return yards and is five yards short of fourth place on the CFL all-time list.