REDBLACKS fall to Tiger-Cats at home 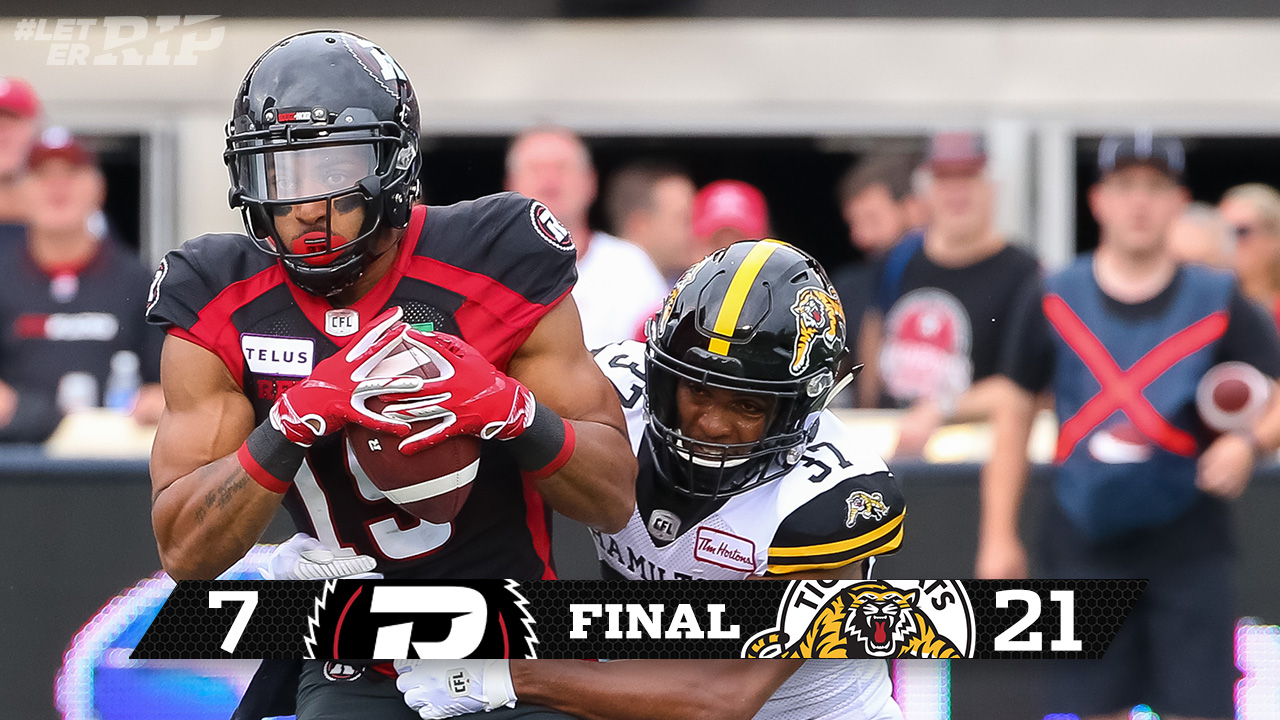 REDBLACKS fall to Tiger-Cats at home

The Ottawa REDBLACKS found themselves in a defensive battle for the second straight week, but couldn’t get going offensively and fell to the Hamilton Tiger-Cats 21-7 Saturday afternoon at TD Place. With the victory, the Tiger-Cats pulled four wins clear of the REDBLACKS in the East Division standings.

Quarterback Dominique Davis completed just 50 percent of his passes for 238 yards, as Ottawa was held out of the endzone.

The REDBLACKS defence forced three turnovers, including two interceptions in the endzone. Avery Williams paved the way with 12 tackles, while Avery Ellis and Michael Wakefield each recorded sacks.

After the teams traded missed field goals that resulted in singles, Antoine Prueau stymied a long Hamilton drive with an pick in the endzone. The first quarter ended knotted at 1-1.

The Tiger-Cats were threatening early in the second quarter near the Ottawa goal line, when Michael Wakefield tackled backup quarterback David Watford for a loss. Lirim Hajrullahu converted a short field goal.

Jonathon Jennings entered the game in the second quarter in an attempt to spark the REDBLACKS. Both offences sputtered for the majority of the first half and the score was 4-1 after 30 minutes.

Hamilton benefited from a pass interference penalty in the endzone to get the ball on the Ottawa goal line to start the second half. This time, Watford scampered in for the major, giving the Ti-Cats a ten-point lead.

Ottawa responded on their next possession with a Lewis Ward field goal and got their second endzone interception of the game, this time courtesy of Anthony Cioffi, keeping the score 11-4 in favour of Hamilton. It was a one-possession game at the end of the third quarter.

The REDBLACKS opened the fourth quarter with a field goal, only to have the visitors find paydirt again. Dane Evans connected with Jaelon Acklin, who juked in for the touchdown. A Hajrullahu field goal soon followed, making the score 21-7.

A big completion to Brad Sinopoli gave the REDBLACKS the ball on the Hamilton ten-yard line with four minutes to go, but three consecutive passes fell incomplete, sealing the win for the Tiger-Cats.

The REDBLACKS (3-6) hit the road next week to take on the Saskatchewan Roughriders (5-3). The teams met in Week 2, with Ottawa winning a 44-41 thriller. Kickoff is scheduled for 7:00 p.m. EDT at Mosaic Stadium on Saturday, August 24. Hamilton (7-2) travels to face the B.C. Lions that same day.

“It’s frustrating, we’re not scoring enough points right now. We have some other stuff going on right now that we can definitely be better at. I know there’s a lot of players in this room and a lot of coaches that are talented people that know how to play winning football and we have to keep working to find a way to get better. We have to look at our offence because we can’t keep doing the same things and expect different.” – HC Rick Campbell

Saturday was Rick Campbell’s 99th game as Ottawa head coach… Nate Behar, a Carleton University product, notched his first reception as a REDBLACK in the first quarter… Return specialist Stefan Logan made his REDBLACKS debut, earning 121 all-purpose yards… Lewis Ward had his streak of 69 consecutive regular season field goals snapped in the first quarter. It was the longest such streak in pro football history… It is the first time since their inaugural 2014  season that the REDBLACKS have lost four in a row at home.