Hold up a sec: Spencer slows down in order to get better 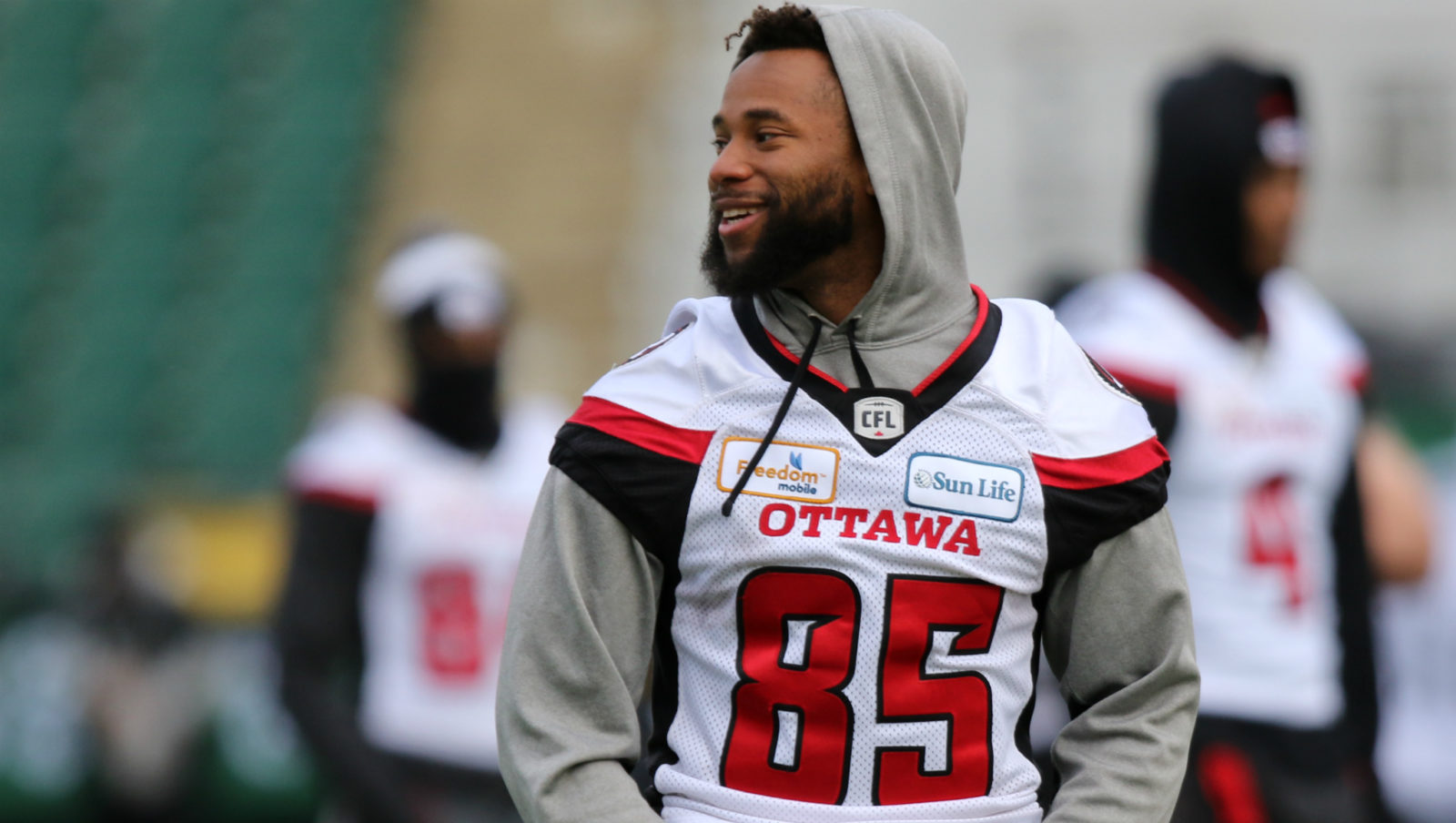 Hold up a sec: Spencer slows down in order to get better

EDMONTON — Diontae Spencer is fast. Like, really fast. Can a guy be too fast?

Turns out that, yes, he can be.

Believe it or not, the Ottawa REDBLACKS’ shifty speedster has become a better receiver by slowing down. At least sometimes.

Nuanced route-running was not Spencer’s forte prior to 2018. But in this season of improvement – one that saw him breach the thousand yard barrier for the first time in his receiving career – it has become more of a hallmark.

Dave Dickenson, Rick Campbell and players from both teams take to the podium on the even of the Grey Cup to address the media.

It has come with a ton of hard work, and a willingness to be coached up.

“He’s done a really good job at understanding how to use the tempo with his speed,” said Ottawa Receivers’ Coach Winston October, just after the REDBLACKS finished up their final walk-through in preparation for the 106th Grey Cup presented by Shaw.

“When we first got together,” October continued, “he said ‘I wanna be a better route runner.’ And he’s really taken the bull by the horns as far as that goes.”

Great route running isn’t always about flat-out speed – often isn’t, really – and Spencer wanted to become a better, more calculating receiver in 2018. That dovetailed perfectly with what the REDBLACKS do under coordinator Jaime Elizondo’s offence, and the improvement in Spencer’s disciplined pattern carving has both the team and the man feeling good.

“Every day in practice I’m trying to find ways I can get better as a receiver,” said Spencer.

He’s on a mission. That mission is in “bringing my game to a complete game,” he said. “When I first came into the league, most people saw me as just a returner. As years go on, I’m still working to get better at just the little things.”

Spencer has been a dynamite returner in the CFL and he remains so, being named the East’s top special teams player in 2018, with a total of 1,707 return yards. Factor in his 1,007 receiving yards and you have the CFL’s leader in combined yardage for the year.

He’ll still use his impressive velocity to blow the top off on a fly pattern, that much is obviously evident. That part of his game is present and as big as ever, almost as dominating as his engaging personality.

And the REDBLACKS use that to their advantage when the situation calls for it. It’s just that Spencer entered this season needing to control that speed, to throttle it down more, in situations that didn’t need him to burn the jet fuel.

Sometimes, the REDBLACKS need Spencer to develop his routes with more patience, in order to better fit the bigger offensive picture as a play unfolds. Often times, Spencer had been completing his assignments too quickly.

He found it a challenge to soak that up and make the adjustment, at first.

“When I’m watching film, I don’t exactly think that I’m running that fast,” he said. “But other guys are like ‘kinda slow down. You don’t need to run this route that fast.’ My speed can be an advantage and also, sometimes, it can kinda hinder me.”

It could be frustrating at times, said Spencer, when he first began the process of breaking some old habits and replacing them with new ones.

“It was a challenge,” he admitted. “Sometimes, being a fast guy, I’m going way too fast. It’s hard for me to break down and stop and stuff like that. But as time goes on, I just think I’m becoming a complete football player.”

“Instead of running a speed cut and gettin’ in the hole too fast,” said October, a fine returner with Montreal and Edmonton during his playing days, “he understands now that he needs to break down the route, give the DB something, and then get into the hole.”

“He’s evolved into a very, very good route runner,” said teammate Brad Sinopoli. “He’s got the skill set, he’s got the smarts to do it. And Jaime’s challenged him to do that and he’s certainly stepped up.”

While his teammates and coaches have praised Spencer for his hard work in becoming a better route runner, he, in turn, has an appreciation for what they’ve done to help him develop the craft.

“He has challenged me a lot in being detailed in every single route,” said Spencer of Elizondo. “Coach October, he’s just been an awesome help, just helping me become a complete football player.”

Speed, shiftiness and disciplined routes might not be the most important things Diontae Spencer brings to this REDBLACKS team.

A lighthearted cut-up, it seems the 26-year-old native of Louisiana is constantly adding just the right mix of hard work and humour to Ottawa’s daily routine.

“I think Diontae is one of the coolest people that you could possibly be around,” said Elizondo. “He’s always making guys laugh. High energy. The centre of attention, fun, smile on his face. Truly, walks around like he’s blessed.”

A smile came across the face of Brad Sinopoli, when asked about his teammate’s presence.

“High energy, always in a good mood,” he said of Spencer. “Every day he comes into work, he just brings positive vibes. That’s something that we want, we love, in our receiver room. We have fun.”

And the frivolity is growing, according to Sinopoli.

“You can see him maturing and evolving as well and getting better. With that he has confidence and that makes him even more silly, I guess sometimes,” he said, laughing.

Spencer’s not doing anything special, he doesn’t think. And it’s not part of some grand design on being a certain way in order to bring a certain something to the team dynamic.

“I know it’s expected of me but it’s one of those things where I feel like it’s just natural,” Spencer said. “I’m just being myself and this organization lets me do that. I think I’m a guy that just likes to have fun and put good energy and good vibes among my teammates.”

A statistical look at quarterbacks around the league