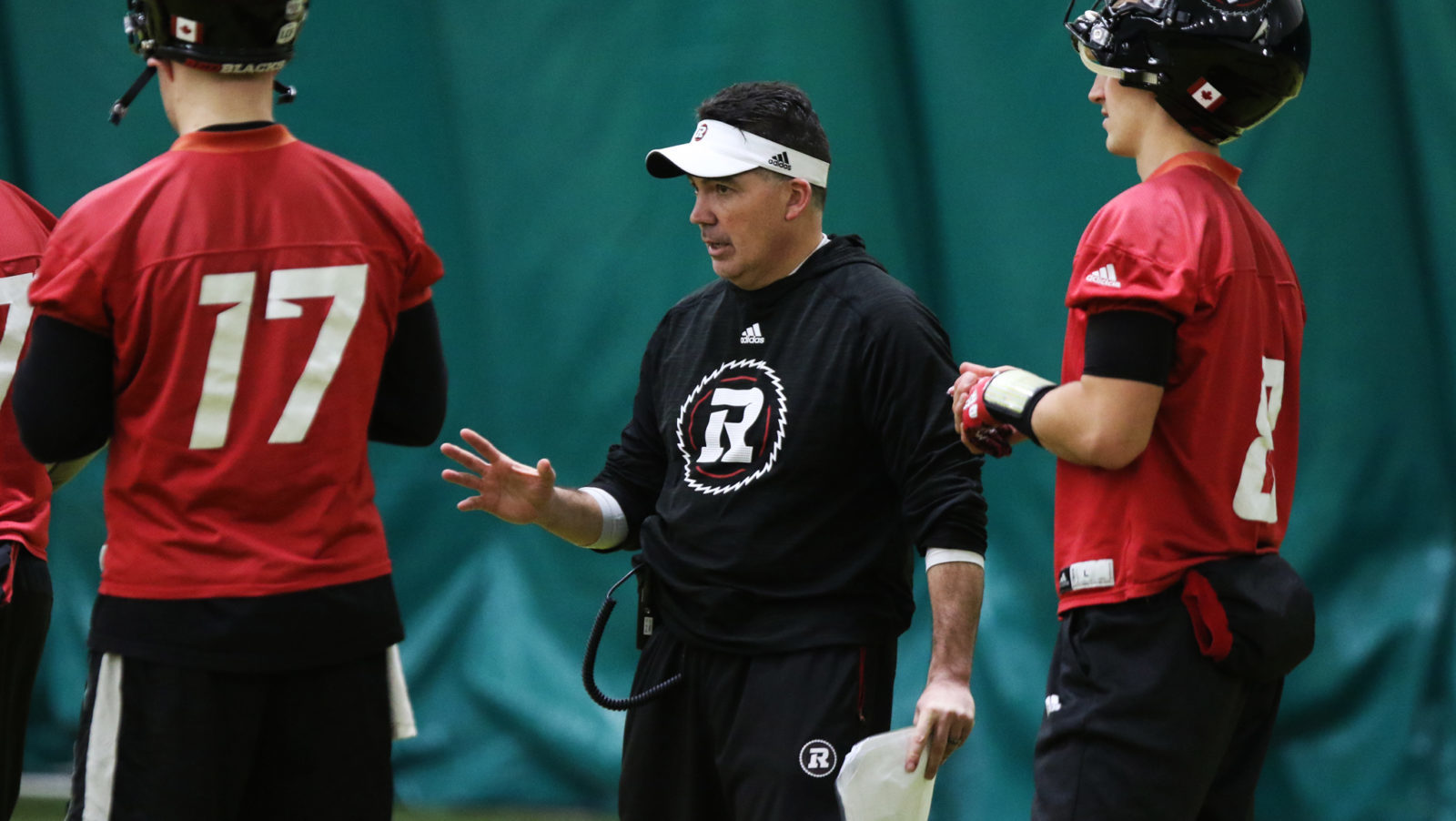 When you talk football with Jaime Elizondo, the offensive coordinator for the Ottawa REDBLACKS, things like tempo, and code words come up. Learning by association. So does the word “mnemonics,” which isn’t something you usually get in your ordinary, everyday pigskin conversation.

But that happens when you’re speaking with Elizondo about simplifying what is complex. And the Ottawa offensive scheme is definitely complex no doubt about that.

“To play for us, you’ve gotta be a smart guy,” said Elizondo, sitting down to talk X’s and O’s ahead of the 106th Grey Cup presented by Shaw.

» Sideline Staff to Center Stage
» 106GC: Head Coaches impressed with each others three phrases of the game
» Mental Audible: Murray soars while leaving stubbornness behind

The processing of information is key in modern football. Gone are the days when a receiver only ever lined up in one position and ran his routes from that particular spot. There are so many formations, and so many options that spring from each of those formations.

For Elizondo and the REDBLACKS, there’s a sizeable challenge in loading all that info into a player’s mind and giving him the ability to know his assignment in the time it takes for quarterback Trevor Harris to bark out “Tuesday,” or “Parakeet,” or “Jennifer Lopez.” (The REDBLACKS famously scored a touchdown after Harris barked out the celebrity’s name prior to a snap during a regular season game).

Elizondo’s challenge has been and still is; How to make what is complicated as simple as possible? And by doing that make it as fast as possible for players to disseminate and understand in the heat of a football game, especially when they are marching in a hurry-up offence?

The Ottawa REDBLACKS ran more plays from scrimmage, on average, than any other team in the CFL in 2018, averaging 61, with no other team cracking the 60 mark. It’s their modus operandi; get lots of plays in and get them in fast, and try to take advantage of what could become a tired, bewildered defence.

They play fast, but not at the expense of creative flexibility. A lot of teams, when they switch to tempo offence, do so with a more bare bones version of their full complement of zigs, zags and switches. The REDBLACKS do not trim things down very much, if at all, and that is a very advantageous thing to have against opposing defences.

“We wanted to be a tempo team, but I wanted to be complicated with our motions,” said Elizondo, in his third season as the REDBLACKS’ offensive coordinator. “And I wanted to move guys around. Those two don’t always go hand in hand. A lot of tempo teams, it’s just straight ahead.”

To keep things spicy, even when using far less than the time allotted on the 20-second play clock, takes a boiling down of things and while many of teams have been using code words and phrases for years now, Elizondo has tried to take things to the next level of brevity, jamming even more of a play’s DNA into one or two words.

“One word that says everything to everybody,” Elizondo said, noting that the team has “a lot” of different code words and phrases at its disposal but generally takes about fourteen into a game.

“Formation, motion, concept,” he said, are all imparted in the time it takes for a word or two to be bellowed.

“You have two concepts on both sides of the field and you put it all into a one word code,” said Elizondo. “That allows us to play fast.”

Elizondo first learned about Mnemonics (a technique for improving memory through association) as it pertains to football while he was an offensive coordinator at Columbia University, under head coach Pete Mangurian. Mangurian sent Elizondo to New England Patriots’ training camp one year to learn a little more about the concept from some guy named Bill Belichick.

The Pats had been using it to speed up their own offensive play and Elizondo decided to implement some of the theories at Columbia. He found it could greatly simplify play calling. Simpler meant faster and he found that, not surprisingly, to be a good thing.

He gives an example of how old school play calling could be a tad wordy and therefore a little harder to decipher in a huddle.

“Whip to weak right, X-stack, 765, W-bingo, Z-post, backs right, R-Vegas,” said Elizondo rapidly, referring back to the days of West Coast Offence play calling, something he’d worked on while an assistant to Marc Trestman in 2008.

“That’s a LOT,” he said. “It’s even a lot for a player in the huddle to hear all that because there’s too much deciphering.”

Different parts of that call would mean something to certain players or positions, the rest of it was nothing to them. Instead of having players try to pick out what’s relevant, process it and then execute, having a code word or phrase that instantly tells all players what they need to know means they can snap the ball and go. 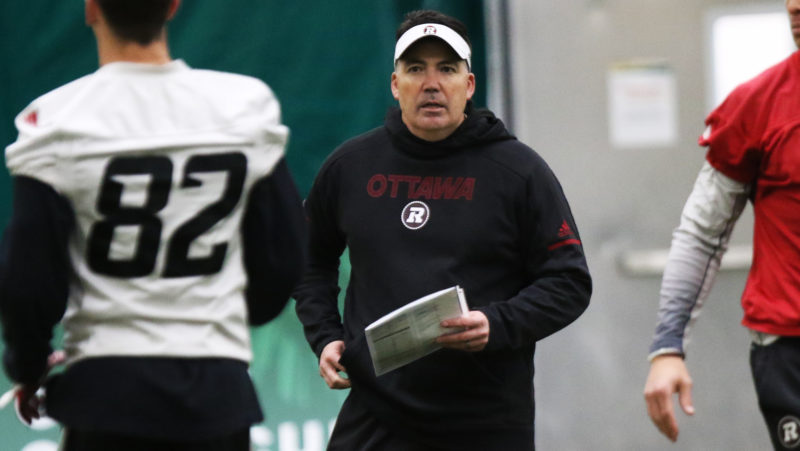 The process has developed, said Elizondo. “We did that in 2016,” he said, referring to beginning to distill Ottawa’s play-calling, “when we simplified how we call our motions.”

“This year we kinda took it to a different level.”

At the beginning of the season, the REDBLACKS may have looked a lot like other teams when it came to playing tempo offence. As the season has gone on, however, the bare bones of July’s tempo playbook have given way to much more complicated schemes.

“That’s something that we’ve been progressing to,” said receiver Brad Sinopoli, who set a record for receptions by a Canadian receiver (116) this season.

“Now our play book is very large,” he said of the tempo package. “We have a lot of code terms and we change them up all the time. We’ve got a lot of smart guys and I think you can do that when you have that type of group.”

Smart guys, and the magic of mnemonics. Elizondo is a firm believer, feeling that it’s a process that fits in well with the sensibilities of today’s young athletes.

“I think today’s youth is about building associations that they can relate to,” he said. “When you make associations, that’s when you start learning plays.”

Within the simplicity of the code word offence, a coach should still tailor the process through which a player commits the association to memory, said Elizondo.

“I do think as a teacher – and that’s what we are, first and foremost – is you’ve gotta learn how each individual learns,” he said.

As for Jennifer Lopez? Elizondo said he’s got her on his smartphone playlist.

“We built an association there for the routes that was kinda fun,” he laughed, shrugging. “An association of, you know, Jennifer Lopez, she’s inviting you to come over… she’s telling you to stay back….”

“We have male names, female names, one-word codes, all sorts of things. As long as there’s an association, I think players can learn faster and thus can handle more.”

More info, more plays, faster snaps. It’s what Elizondo and the Ottawa offence have been have been building, all season long.

Jaime Elizondo’s time as a training camp guest of the New England Patriots was a fascinating learning experience and one that confirms the notion that their head coach, Bill Belichick, runs a pretty secure operation.

“I had my own office, I could watch video,” said Elizondo. “But, yet, if I had to go to the restroom, I was escorted down the hall. Just to tell you what it’s really like there. So, you’re in this office and if you need anything, hit this button, somebody’ll come and bring you water.”

Yet when it came to facilitating Elizondo’s chance to learn, the Pats were forthcoming. “They gave me tremendous access,” he said, thankfully. “Everybody was saying ‘wow, nobody’s ever gotten this much access.’”

“I was just some college coach. But he wrote me, afterwards, a personal handwritten note to make sure I’d enjoyed my time there. Anything I needed, so on and so forth.