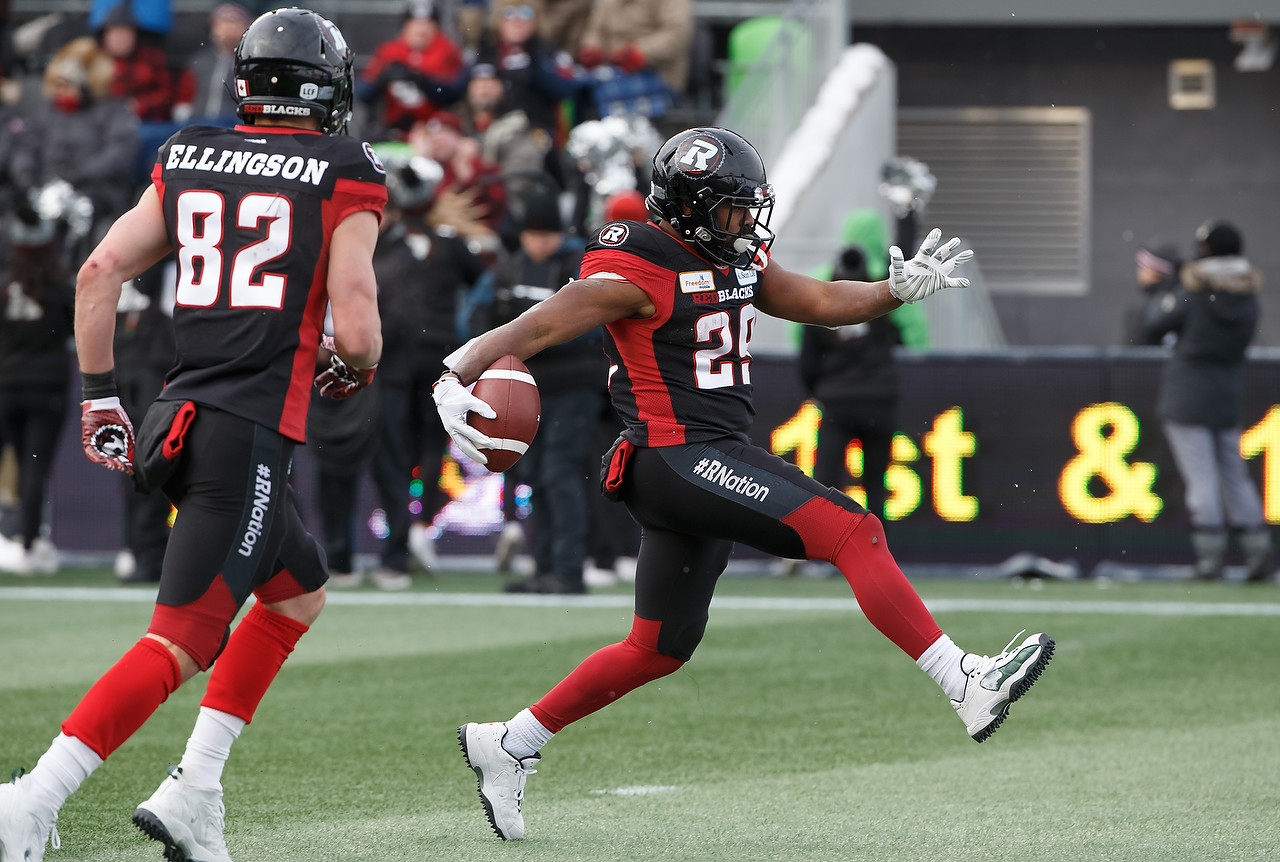 The Ottawa REDBLACKS are one win away from glory as they defeated the Hamilton Tiger-Cats 46-27 Sunday afternoon at TD Place. Ottawa advance to the 106th Grey Cup, which will be played next Sunday.

The Ottawa defence bent but refused to break, and picked off Jeremiah Masoli three times in a dominant display.

Both offences moved the ball with ease in the first quarter, but neither could find pay dirt. Lewis Ward kicked two field goals and Lirim Hajrullahu countered with a three-pointer of his own to make the score 6-3 after the first quarter.

The REDBLACKS got the big play they were looking for in the first two minutes of the second quarter. Jeremiah Masoli was under pressure and lobbed a pass that was intercepted by Anthony Cioffi, giving Ottawa the ball deep in Hamilton territory.

It didn’t take long for Ottawa to find the end zone, with Harris dumping the ball to Diontae Spencer, who sped to the corner for the touchdown. William Powell darted in for the two-point convert to make the score 14-3.

After a Hamilton field goal, the REDBLACKS charged down the field once again. They worked their way to the goal line, when Harris floated a pass to JC Beaulieu for the touchdown. The two-point attempt failed, making the score 20-6.

The REDBLACKS kept the throttle down, with Jonathan Rose intercepting Masoli and taking the ball into the Tabbies red zone. On the very next play, Harris hit Spencer for his second receiving touchdown of the day. Ward hit the convert, making the score 27-6.

Hamilton would get points before the half. Jeremiah Masoli hooked up with Mike Jones, cutting the REDBLACKS lead to 27-13.

Ottawa needed to rebound from the last second score, and they did so on their first drive of the second half. Harris hit Marco Dubois, who lunged in to the end zone to increase the REDBLACK lead to 33-13.

Hajrullahu kicked consecutive field goals, but the Ottawa defence was holding the Tabbies out of the end zone. Meanwhile, the offence kept ticking. Brendan Gillanders caught a short pass and turned on the jets to make the score 39-19.

The teams traded touchdowns in the fourth quarter, but the final 15 minutes were quiet compared to the rest of the game.

The REDBLACKS advance to the Grey Cup – their third in franchise history. The team will depart for Edmonton on Tuesday to begin preparing to face the Winnipeg Blue Bombers or the Calgary Stampeders. The game is scheduled for Sunday, November 25 at 6 p.m. eastern (4 p.m. local).

“For some reason, this morning I was a little more anxious about things. I knew our guys were in the right frame of mind and as long as we didn’t have bad luck early in the game, good things could happen. There was really good energy. I hear Edmonton’s beautiful in late November.” – HC Rick Campbell

“It was working for us today. Jaime [Elizondo] called an outstanding game. The o-line protected well and [Greg Ellingson], Brad and the receiving core was ready to play. We can enjoy this for a couple of hours and then we move on. Flush this one, get it out of the way, and go win the most important one.” – QB Trevor Harris