REDBLACKS roar back to earn pivotal victory over Ticats 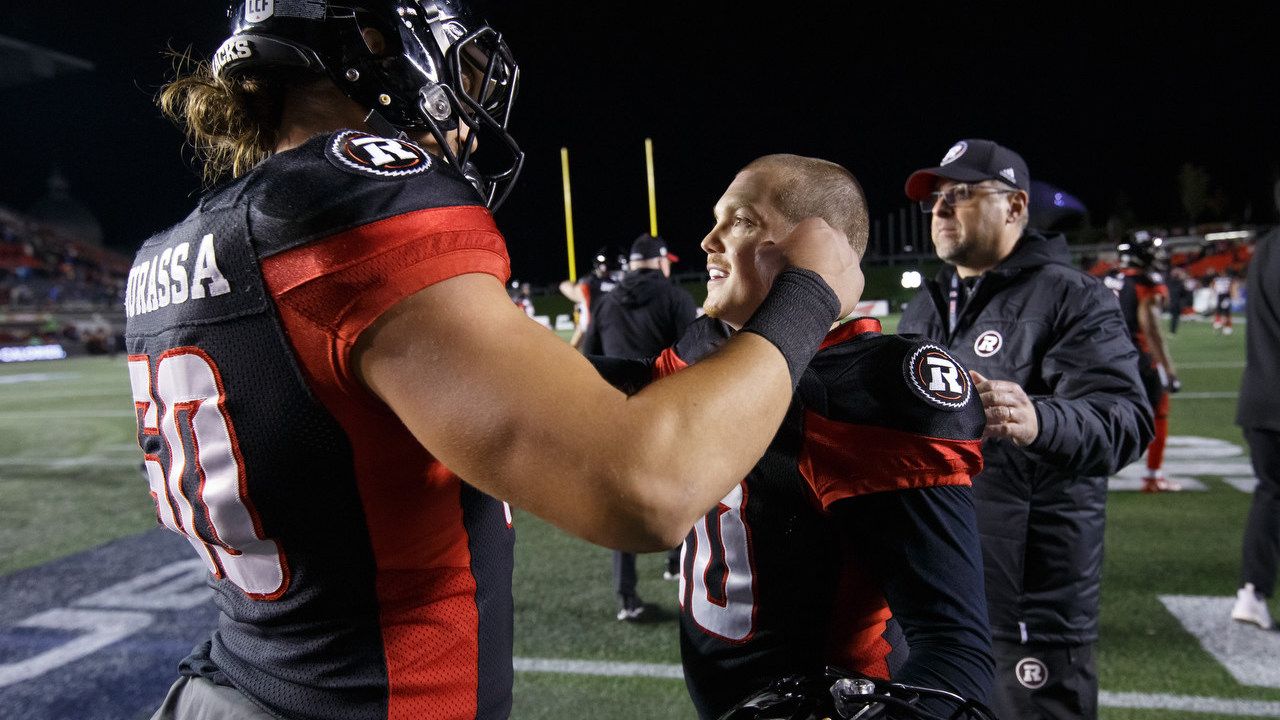 REDBLACKS roar back to earn pivotal victory over Ticats

It was a tale of two halves at TD Place, where the Ottawa REDBLACKS worked their way back from a 16-point deficit to pull away from the Hamilton Tiger-Cats in the CFL’s East Division race. They took away a 35-31 win, giving the REDBLACKS their ninth victory of the CFL season.

Ottawa now has a two-point advantage over Hamilton for the division lead with one more game against the Tiger-Cats next Friday night in the second half of a home-and-home.

The REDBLACKS hoped for a repeat of the Week 7 meeting between the same two teams, when Ottawa held off the Ticats in a narrow 21-15 win. But it was the Tiger-Cats who flew out of the gate.

They put up two touchdowns in the game’s first quarter, with Jeremiah Masoli feathering a 22-yard pass to Luke Tasker, with the Ticats wide receiver cashing in the first points of the game at 9:03 of the opening quarter.

While the REDBLACKS only managed a field goal after marching down field on the ensuing drive, the marker came with another milestone for kicker Lewis Ward. His 44th consecutive field goal equaled the all-time record in professional football history.

Ward didn’t have to wait long for the opportunity to pull into sole possession of the record. At 4:30 of the second quarter – just two minutes after he tied the record – the Kingston, Ont. nailed his 45th consecutive field goal despite a daunting 52 yards separating him from the goal posts.

That conversion made the score 7-6 Ticats, but Hamilton would take control of the game for the remainder of the half.

Masoli completed two more touchdown passes, and a clutch 45-yard pass to Mike Jones to put the Ticats on the Ottawa 2 just before the second successful dish for the Ticats QB. The score was then 22-6 Ticats.

Ottawa added a touchdown at 1:01, when Dominique Davis was handed the football on the Hamilton 2 and ran in the REDBLACKS second touchdown of the evening.

Then the comeback really began at the end of the third quarter, with the score at 25-14 Hamilton. Davis did it again at 10:17, taking the hand-off on the Hamilton 1 for his second touchdown of the game, cutting the Ticats lead to three.

Lirim Hajrullahu completed his third field goal of the game on the next Hamilton drive, but the REDBLACKS had an answer. It was in the form of a touchdown pass from Trevor Harris, finding Diontae Spencer from the Hamilton 10-yard line. Spencer, the Ward’s kick was good for the 46th straight time, giving Ottawa a lead for the first time in the game 4:53.

The Ticats responded on their next drive. Masoli looked for receiver Brandon Banks from the Ottawa 46-yard line, but suffered a double whammy – both an incomplete pass, and an injured Banks after a hard fall. That forced Hamilton into a 53-yard field goal attempt, but Hajrullahu used the wind to his advantage and drilled the attempt at 12:13. That gave Hamilton the lead back, 31-29 over the hosts.

Davis’s third touchdown of the game on the next drive gave Ottawa a four-point lead back. It appeared that the REDBLACKS had the game salted away with one minute to play, after a lengthy 40-yard run from William Powell that sent 23,534 REDBLACKS fans into a frenzy.

But the celebration was postponed after a REDBLACKS fumble gave the Ticats one more chance with the football. They had 45 seconds remaining, but failed to get the ball into Ottawa territory.

“People do second guess us and think we’re puzzling or whatever, and I do believe that we have work to do. But I would like to give our players some credit. All that matters is the standings, and we have all the other teams in the east looking up at us right now.” – HC Rick Campbell

“I didn’t think about (the record-breaking field goal) too much, but walking out there I knew that it was a long one and it was important for the game’s result. It was up to me and come out to do what I needed to do.” – K Lewis Ward

REDBLACKS outscored Hamilton 21-6 in second half of game… Lewis Ward’s field goal gives him all-time lead over Adam Vinatieri, the longtime placekicker for the NFL’s Indianapolis Colts… his record streak of 44 ended on Nov. 20, 2016… Greg Ellingson with fourth straight 1000+ yard season… Brad Sinopoli only other REDBLACK to share that statistic.