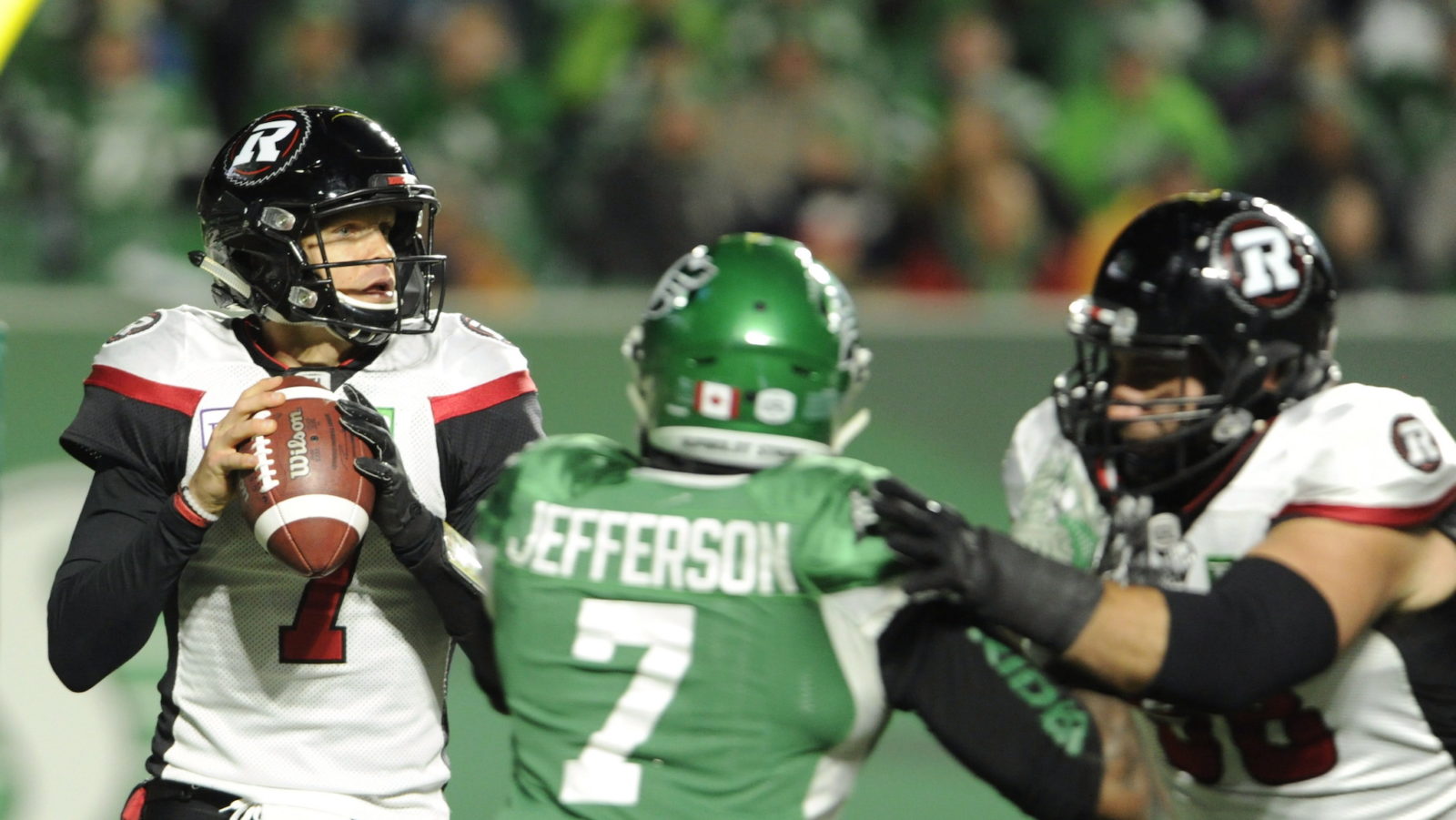 Ottawa Redblacks quarterback Trevor Harris looks for a receiver during first half CFL action at Mosaic Stadium in Regina on Saturday, Sept. 15, 2018. THE CANADIAN PRESS/Mark Taylor

The Ottawa REDBLACKS took out two weeks of frustration on the Saskatchewan Roughriders Saturday evening, defeating the ‘Riders 30-25 at Mosaic Stadium in Regina. Ottawa snapped a two-game losing streak and regained sole possession of first-place in the East Division.

The offence was humming for the REDBLACKS. William Powell notched his fifth 100-yard rushing game of the year, while Trevor Harris threw for over 300 yards and two touchdowns.

Jonathan Rose recorded two, clutch interceptions and moved into the league-lead with five picks on the year. The defence has now held opponents to 30 points or less in 11 of 12 games this season.

It was an auspicious start to say the least for the REDBLACKS. Marcus Thigpen took the opening kickoff 97 yards for the touchdown, giving the ‘Riders an early 7-0 advantage.

After a pair of two-and-outs, Ottawa got an electric response. Harris hooked up with Diontae Spencer on a long catch-and-run, giving the REDBLACKS the ball deep in Saskatchewan territory. Powell then got the ball on the ground and found the end zone. The two-point convert failed, making the score 7-6.

Saskatchewan kicked a field goal to extend their lead, but the defences got some traction and the opening quarter ended 10-6 in favour of the home side.

Ottawa took the lead early in the second quarter off a deep ball. It was Trevor Harris to R.J. Harris, the latter of whom juggled the ball in the end zone and brought it down for a 44-yard strike. This time Powell converted the two-pointer, making the score 14-10.


With the Roughriders driving late in the first half, Jonathan Rose jumped a route for his fourth interception of the season. Had Rose not leaped in front of receiver Joshua Stanford, it would have been a touchdown for Saskatchewan.

The offence then took the ball the length of the field, where Harris connected with Spencer on a perfectly-placed pass at the side of the end zone. The 10-play, 109-yard drive made the score 20-10 going into the half.

It was another tough start for the REDBLACKS in the second half. Kyran Moore took a punt all the way to the house to cut into the Ottawa lead. A safety for the ‘Riders accounted for the rest of the scoring in the third, but emotions were starting to flare.

Powell then added to the lead with a 69-yard run to paydirt. SirVincent Rogers opened up a hole for Powell who turned on the jets and left the defence in his dust. A Ward convert gave Ottawa a 12-point lead.

With under three to go, Zach Collaros connected with Naaman Roosevelt for a catch-and-run to make the game interesting. After a Brett Lauther convert, the score was 30-25.

Saskatchewan would get the ball back with just over a minute to go, but Rose earned his second interception of the night to preserve the victory.

Ottawa (7-5) will face another stiff West opponent next week when the Edmonton Eskimos visit TD Place. Kickoff is at 4:00 p.m. on Saturday, September 22. The Roughriders (7-5) will also travel east to play the Toronto Argonauts.

There were no sacks recorded in the game… The Roughriders had more return yards (371) than yards of offence (240)… This was only the seventh time in CFL history that the opening kickoff was returned for a touchdown. Thigpen was the last to do it in 2010… The REDBLACKS were 1-for-3 on two-point conversion attempts… Trevor Harris surpassed Hall of Famer Ken Ploen on the all-time passing yards list. Harris is now 41st all-time in CFL history.