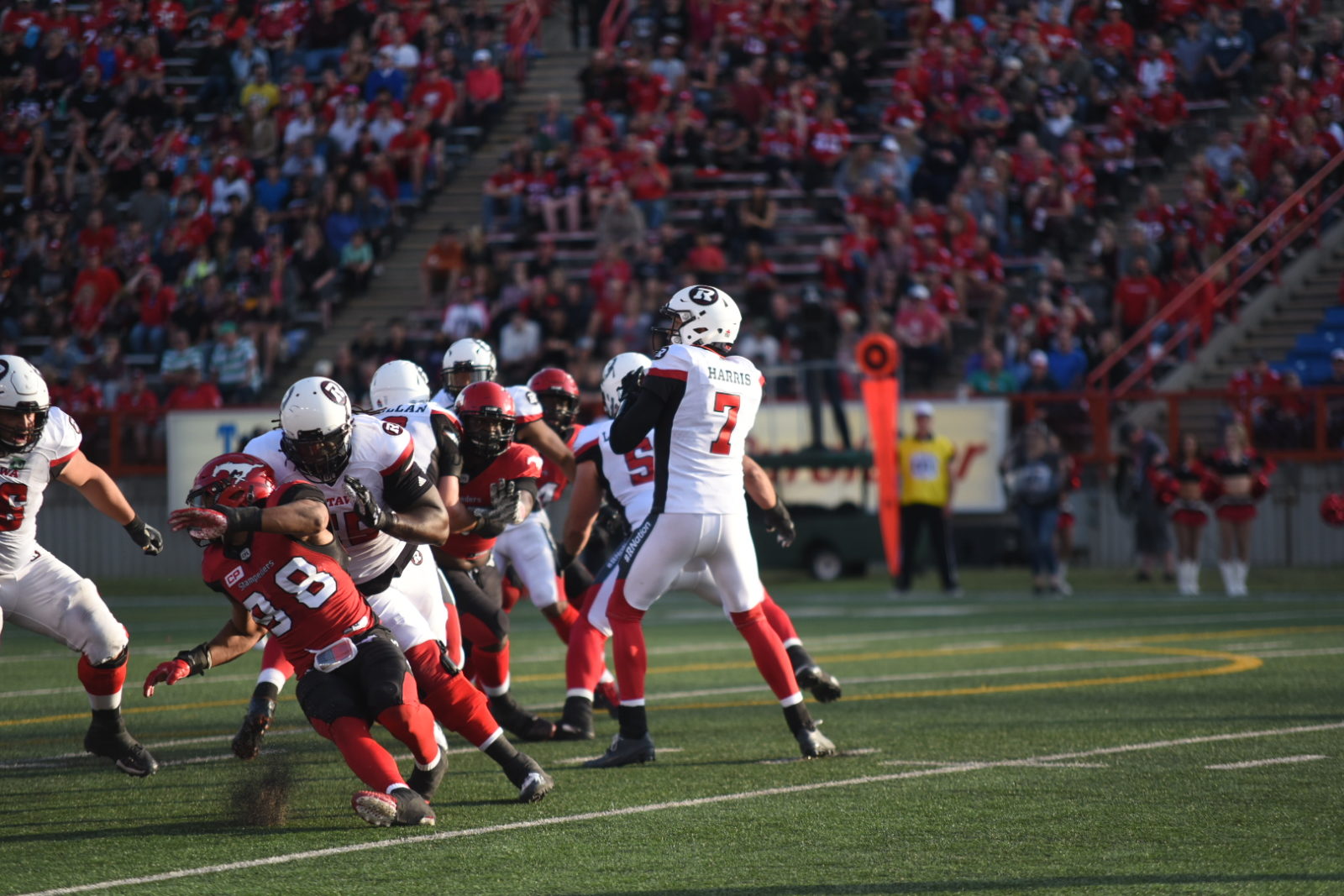 The Ottawa REDBLACKS dropped an all-out shootout in Alberta on Thursday night, falling 43-39 against the Calgary Stampeders in a game that featured ridiculous highlights and countless momentum swings.

The REDBLACKS appeared to open the scoring early on a beautiful 80-yard connection between Harris and Greg Ellingson, but the touchdown was called back to the initial spot of the catch on an illegal block penalty. Two plays later, kicker Brett Maher drilled a 33-yard field goal to give Ottawa an early lead.

Calgary got on the board midway through the first quarter, when Mitchell found Kamar Jorden in the end zone to cap a five-play, 74-yard drive spearheaded by a pair of Lemar Durant catches totaling 54 yards. Stamps kicker Rene Paredes missed the convert, and the hosts led 6-3.

Maher drew the REDBLACKS level on the first play of the second quarter, an 18-yard chip shot of a field goal.

The Stampeders regained the lead a few series later, when Mitchell found Marken Michel for a 26-yard touchdown pass. Mitchell then connected with veteran Marquay McDaniel for a two-point convert to make it a 14-6 Calgary lead.

After a few hairy moments deep in their own half — Harris was hit and fumbled for a Calgary fumble-recovery touchdown, which was reversed to an incomplete pass after review, and a Maher punt was blocked — the REDBLACKS conceded a 15-yard Paredes field goal.

Maher cut the deficit to eight points late in the first half with a 29-yard kick, and then it was Diontae Time.


Fielding a Calgary punt at his own 14-yard line, REDBLACKS return man Diontae Spencer burst up the middle and, without breaking stride, trotted to the Calgary end zone for a 96-yard touchdown return. Mossis Madu Jr.’s three-yard dive on the ensuing two-point convert then took Ottawa into the half tied at 17.

The Stamps came out flying in the second half, as backup quarterback Andrew Buckley turned a 3rd-and-one sneak into a 60-yard touchdown and, after Paredes missed the convert, a 23-17 Calgary lead.

A fumble by full back Pat Lavoie on the ensuing possession was then returned by Stamps linebacker Maleki Harris for another major. Paredes missed yet another convert, but made up for it by booting a single on the subsequent kick off to push the Stamps lead to 30-17.

The back and forth continued, with Maher cutting Ottawa’s deficit to 10 with a 28-yard field goal.

After the REDBLACKS defence forced a two-and-out, Trevor Harris marched his offence down the field and found Brad Sinopoli for a 34-yard catch-and-run to the end zone. Following Maher’s convert, Ottawa had clawed its way back to a three-point deficit.

Then, Stamps return man and Carleton University product Tunde Adeleke took it all away with a ridiculous, spinning 71-yard punt return touchdown. Paredes once again missed the convert, but Calgary led 36-27.


Madu responded for the REDBLACKS some four minutes later, when he raced through the heart of the Stamps defence for a 14-yard touchdown. Maher’s convert was blocked, so Calgary’s lead sat at 36-33.

The wild offensive swinging continued on the Stampeders’ next possession, as Mitchell found Jorden from eight yards out; Paredes split the uprights on the convert to make it a 10-point lead for the hosts.

The incredible back-and-forth nature of the game continued on the ensuing Ottawa possession, as Harris connected with Spencer for a 65-yard touchdown down the sideline; Maher missed the convert, and Calgary retained its 43-39 lead through the final whistle.

The REDBLACKS return home for their first game against an East Division opponent this season when the Toronto Argonauts visit the nation’s capital on July 8. Tickets are available by clicking here, calling 613.232.6767 X1 or in person at The Box Office at TD Place.