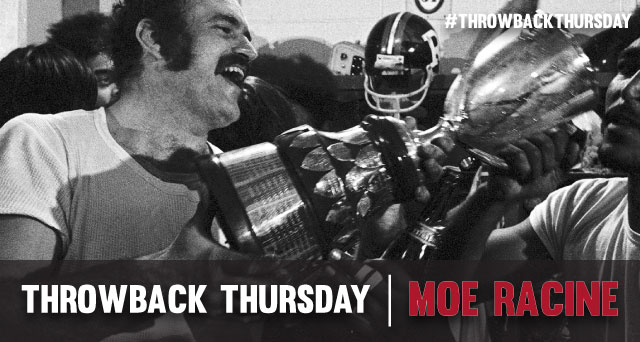 It is difficult for any professional football player to dominate at their position. Moe Racine was a rare athlete who excelled as both an offensive lineman and placekicker while playing for the Ottawa Rough Riders from 1958 to 1974.

Racine did not set out to be a pro football player. “I was getting ready to play junior football in Cornwall, Ontario,” recalls Racine. “Our coach, John Bove, had played with the Ottawa Rough Riders. Given my size at 6’3 and 250 pounds, he encouraged me to try out for the Rough Riders.”

The Rough Riders were impressed enough that they signed Racine to a contract. The first year, Racine played with Ottawa St. Anthony’s, a major junior football team.  In 1959, Racine joined the Rough Riders on a permanent basis as an offensive lineman.  At first, it was a big adjustment for Racine. “I was always the biggest player on the team,” said Racine. “When I jumped to the pro level, many of the players were the same size as me or bigger.”

Racine quickly adapted and by 1962, he was selected as an all-star at offensive tackle. If that was not enough, he also began placekicking for the team. “One day after practice, I kicked a ball about fifty yards. One of the coaches, Bill Smyth, saw me do that and was amazed.  Soon after, I became the kicker for the team. I started doing kick-offs and then progressed to handling field goals and converts as well.”

Racine did not only excel with personal accomplishments. The Ottawa Rough Riders in the 1960’s and early 70’s had very strong teams. During Racine’s CFL career from 1959-74, he played in five Grey Cups, winning four. “We had great players like Russ Jackson and Ron Stewart,” remembers Racine. “For me, the 1973 Grey Cup win was the most memorable as I was a captain. Most of the players I had played with over my career were gone. We did not have an outstanding team that year but got it done in the end.”

When Racine played for the Rough Riders, football was even more popular than today. “When we would play on the weekend, the entire city would shut down. The stands were always packed. It was a wonderful time in my life.”

Racine’s football career and life has been captured for posterity in the book, Moe the Toe, Never My Dream: A Memoir.  Fittingly, the book was written by Racine’s son, Thom. “It started out with visits with Dad where he would be telling stories about football and I would be taking notes,” said Thom Racine. “At first, we had thought of a coffee table book with photos but one thing led to another and we had a full-fledged book.”

The experience of sharing memories brought father and son closer together. “I worked thirty-two years on the Cornwall Police Force,” said Thom Racine. “I’d try and see Dad semi-regularly and talk by phone, but when my parents moved back to Cornwall, the time we spent sitting down and really talking about his football career was good for both of us.”

Moe Racine recently capped an outstanding football career with induction into the Canadian Football Hall of Fame. “I was exciting to attend the Hall of Fame game last year in Montreal. They put on an excellent event bringing in our family. I was extremely touched.”

In fact, Racine has become something of a celebrity in his hometown, Cornwall. “After I left football, things were pretty quiet for many years. Now, with the book and Hall of Fame induction, people are recognizing me around town. Basically, I am quite a shy person. I have had to adjust to being in the spotlight again!”